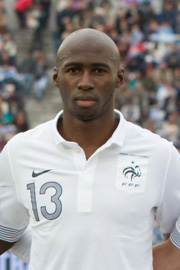 Eliaquim Mangala was honoured to receive his first cap from France Under 21s on 13 November 2009 in a friendly against Tunisia. Unfortunately, due to a groin injury, he had to drop out of the squad to play Slovenia in Euro 2011 Under 21 qualification match, scheduled for a few days later.

This was just a postponement. On 15 November 2011, in a qualification match for the 2013 Under 21s European Championship, Mangala opened the scoring against Slovakia, France’s main rival in the group.

These matches were crucial for Mangala’s career as his potential was reminiscent of other great players. The former manager of the France national team, Raymond Domenech, was convinced:

“Mangala has something. He has character. Didier [Deschamps] is aware of his situation. We’ve talked about it. When you see players like that, you have to say something.” (Le Figaro newspaper, 19 March 2013).

--> Eliaquim  was honoured to receive his first cap from France A on 6 June 2013 in a friendly against Uruguay.